Article for Nutritional Treatment for Children and Adults with Autism 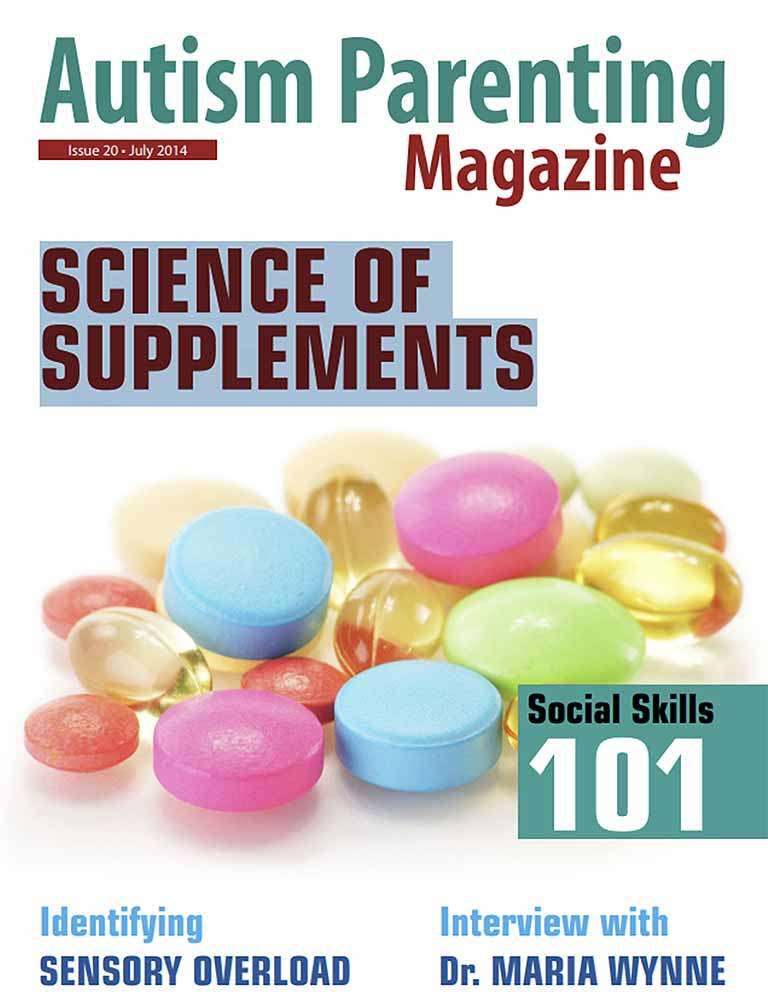 RESEARCH ON INDIVIDUAL VITAMIN/MINERAL SUPPLEMENTS FOR CHILDREN AND ADULTS WITH AUTISM
According to a recent survey of 539 physicians, vitamin/mineral supplements are among the most widely recommended medical interventions for autism, and are recommended by 49% of physicians for children with autism [Golnick and Ireland 2009]. However, there have been relatively few treatment studies of vitamin/mineral supplements for children with autism.

Three studies demonstrated that children with autism have impaired methylation (decreased SAM), decreased glutathione, and increased oxidative stress [James et al 2004, 2006, 2009] compared to neurotypical children. Two open-label studies demonstrated that nutritional supplementation – with vitamin methyl-B12, folinic acid (a special type of folic acid), and (in one of the studies) trimethylglycine – resulted in statistically significant improvements in methylation, glutathione, and oxidative stress. [James et al 2004, 2006]. A 30-week, doubleblind, placebo-controlled study [Dolsek et al 1993] of high-dose vitamin C (110 mg/ kg) found a reduction in autism severity as measured by the Ritvo-Freeman scale. One small open-label study (Freedenfeld et al 2011) found that two weeks of NADH (the active form of vitamin B3) was effective at improving methylation, glutathione, NADH, and ribose (Freedenfeld et al. There have been 11 double-blind, placebocontrolled studies of very high dose vitamin B6 with magnesium, with almost all showing positive behavioral improvements. However, the studies were somewhat limited by methodological problems including small sample size and the use of assessment tools of limited validity [Adams et al 2006a].

RESEARCH ON MULTI-VITAMIN/MINERAL SUPPLEMENTS FOR CHILDREN AND ADULTS WITH AUTISM
2004 Study: In 2004 we published a small pilot study of a multi-vitamin/mineral supplement for children with ASD [Adams et al 2004], which used a randomized, double-blind, placebo-controlled design. None of the children in the study were on a vitamin/mineral supplement for two months prior to the study. They found that the treatment group generally improved more than the placebo group, with statistically significantly greater improvements in sleep (p=0.03) and gastrointestinal problems (p=0.03), both of which are very common in autism.
2007/2008 Study: Due to the promising results of the 2004 study, in 2007/2008 we conducted a small open-label pilot study of a customized vitamin/mineral supplement with 10 children with ASD, which included extensive pre and post-measurements of nutritional status (vitamins, minerals, amino acids) and metabolic functioning (oxidative stress, methylation, glutathione, sulfation, and neurotransmitters). The supplement was well-absorbed (as indicated by increases in blood levels and urinary excretion), and improved levels of glutathione and some neurotransmitters. The results of that pilot study were used to reformulate the supplement, adjusting the level of some ingredients slightly up or down based on the laboratory findings.
2008/2009 Study In 2008/2009 this revised “second generation” supplement was used to conduct a randomized, double-blind, placebo-controlled three month treatment study. The study started with a detailed comparison study of the nutritional and metabolic status of the children with autism (N=55, recruited for the treatment study) vs. neurotypical children of similar age, gender and locale (Adams et al 2011a). The autism group had many statistically significant differences (p<0.001) in their average levels of biomarkers compared to the neurotypical group, including: Low levels of biotin, glutathione, S-adenosylmethionine (SAM), uridine, plasma adenosine-5’-triphosphate (ATP), reduced nicotinamide adenine dinucleotide (NADH), reduced nicotinamide adenine dinucleotide phosphate (NADPH), plasma sulfate (free and total), and plasma tryptophan; also high levels of oxidative stress markers and plasma glutamate. A statistical analysis demonstrated significant associations between all three autism severity scales and several groups of biomarkers, including primarily vitamins, minerals, and amino acids. The treatment part of the study involved a randomized, double-blind, placebo-controlled three month vitamin/mineral treatment study (Adams et al 2011b). The study involved 141 children and adults with autism. Biomarkers of nutritional and metabolic status were measured in a subset of the participants (53 children ages 5-16). The vitamin/mineral supplement was generally well-tolerated, and individually titrated to optimum benefit. Levels of many vitamins, minerals, and biomarkers improved/increased showing good compliance and absorption. There were many statistically significant improvements in nutritional and metabolic status, including improvements in sulfate, methylation, glutathione, oxidative stress, ATP, and NADH. Most of these metabolic biomarkers improved to normal or near-normal levels.
The supplement group had significantly greater improvements than the placebo group on the Parental Global Impressions-Revised (PGI-R, Average Change, p=0.008), and on the subscores for Hyperactivity (p=0.003), Tantrumming (p=0.009), Overall (p=0.02), and Receptive Language (p=0.03). Overall, it seemed that about 1/3 of the group had no improvement, 1/3 had some improvement, and 1/3 had substantial improvement. The improvements were greatest in the group under age 18, but there were some reported benefits in the adult group as well.
2011-2013 Study: From 2011 to 2013 we conducted a 12- month, randomized, single-blind, controlled study of treating children and adults with autism with a combination of 6 nutritional treatments, including an improved version of the vitamin/mineral supplement used in our 2008/2009 study. The vitamin/mineral supplement was rated by participants as one of the two most effective treatments, and the results of that study are now being written up for publication.
2014: Release of ANRC Essentials: In June 2014 we decided to release an improved version of the supplement used in our 2007/2008, 2008/2009, and 2011/2013 studies. To prevent any financial conflict of interest, we formed a non-profit, the Autism Nutrition Research Center (ANRC), which distributes the vitamin/mineral supplement, now known as ANRC Essentials. ANRC also provides general nutritional recommendations to families at www.autismnrc.org.

SUMMARY
Many research studies have demonstrated that children and adults with autism often have nutritional and metabolic problems, including problems with methylation, glutathione, oxidative stress, sulfation, lithium, and more. Our research has demonstrated that a vitamin/mineral supplement can substantially improve or even normalize those nutritional and metabolic problems, and result in significant improvements in symptoms based on a large, doubleblind, placebo-controlled study.

RECOMMENDATION
We recommend that all children and adults with autism consider a 2-3 month trial of a vitamin/mineral supplement designed for individuals with autism that is similar to the one used in our studies. By starting at a low dose, and gradually increasing it, there is minimal risk of adverse effects, and many children and adults are likely to benefit, sometimes substantially.